Yesterday the YouVersion Team pushed updates to the newly launched Groups and Live areas. For Groups you will now see easy links to go back in and edit your Events after you have set them up. You will also be able to access your Event Dashboard which is where you can view responses to Prayer Requests, Questions and the large screen display for your Polls. And in general you should be able to find your way around better in the Groups and Live areas.

There have also been a number of behind the scenes improvements to help speed up YouVersion and help it scale under all the heavy usage we’ve been getting, especially on Sunday mornings. We are excited for this update as the first of many that are on the way to continue to improve your experience with YouVersion.

Thank you to all the churches and groups that have already been so creative in using YouVersion Live for your events in your community. In fact we would love to see the creativity and innovation you are putting into your Events to share with others in the YouVersion community. You can send us the event link through a mention on Twitter to @YouVersion.

And if you haven’t seen it yet be sure to check out the first in a series of videos on “Why I Love YouVersion.” 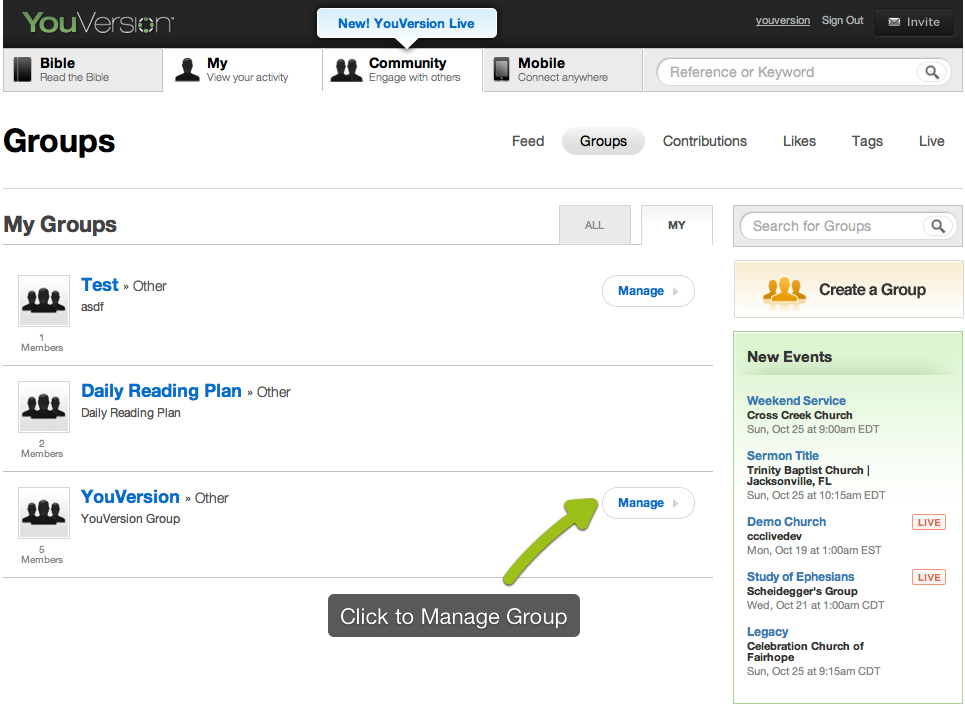 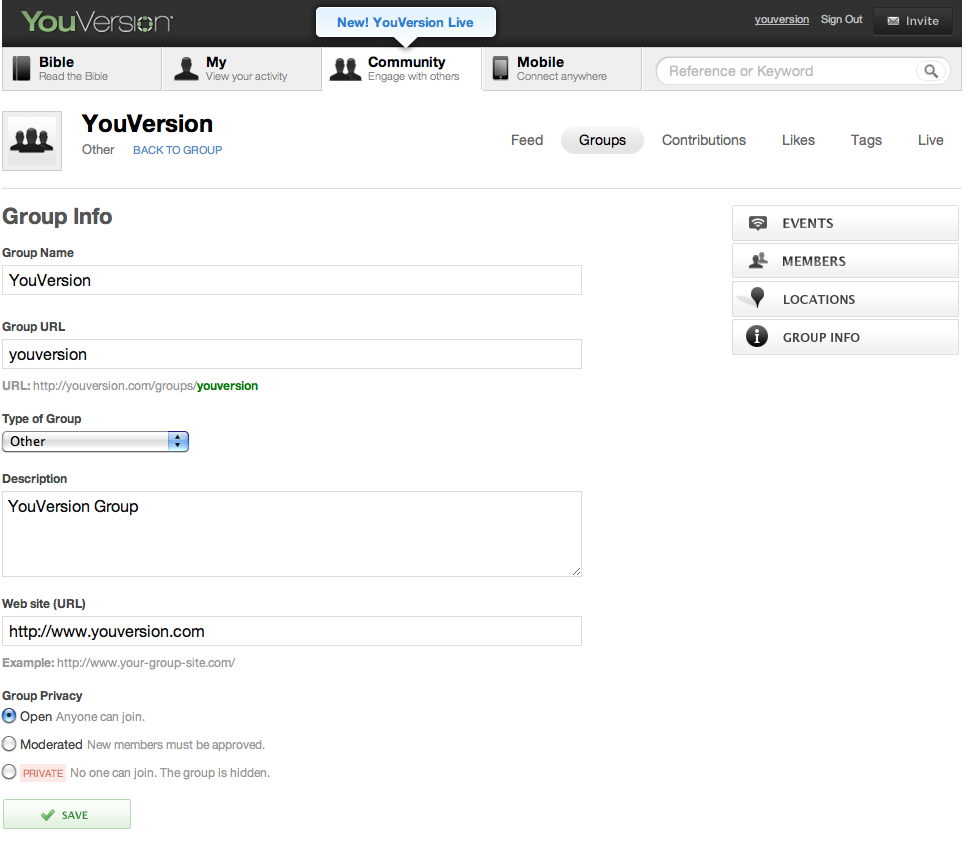 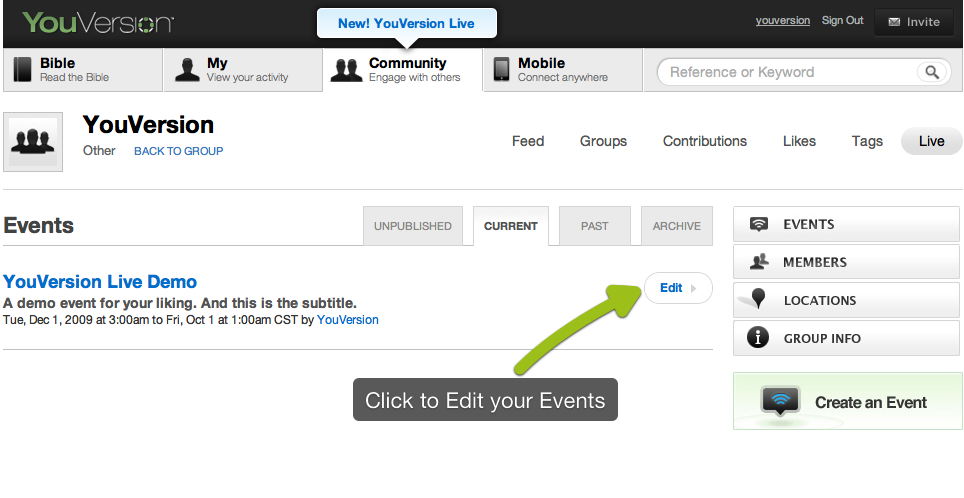 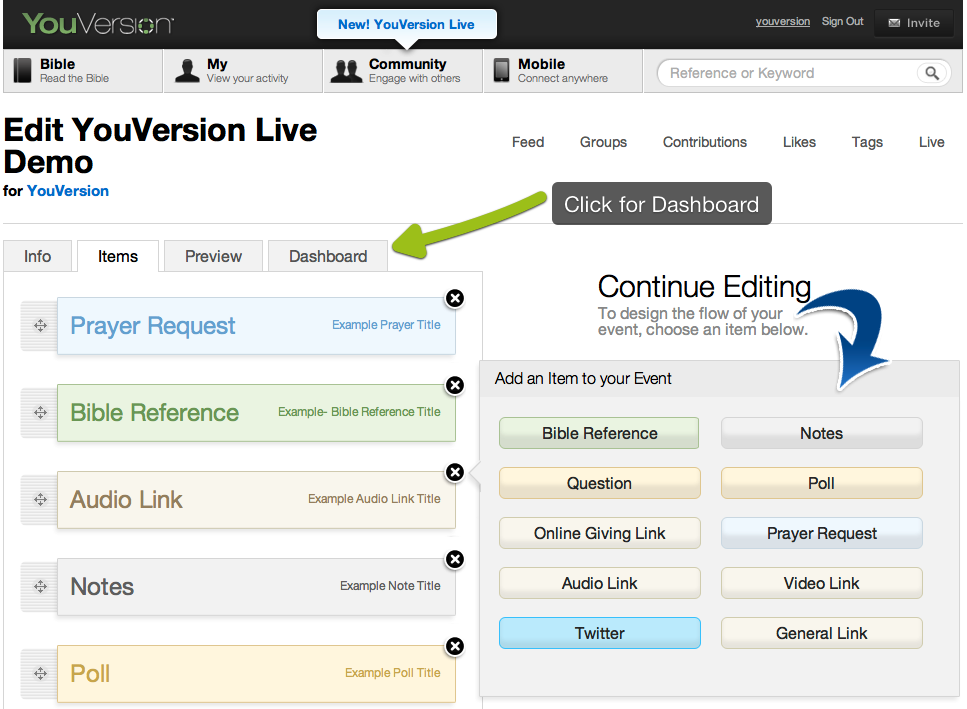 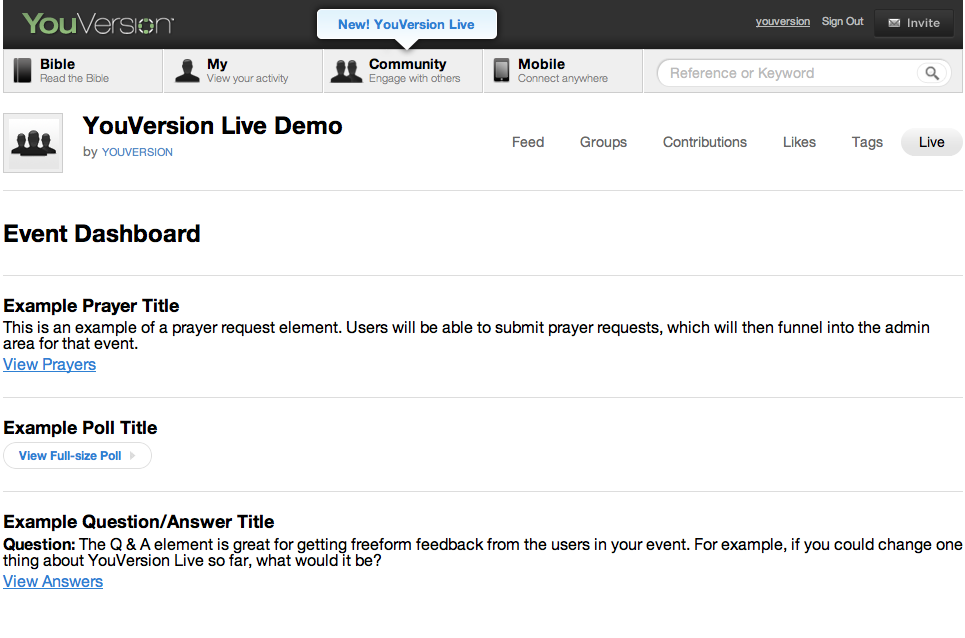 An update of the Bible app is on the way! Version 2.0 of the YouVersion iPhone Bible app (Bible) is waiting patiently in line for approval at the iTunes Store. Last week we pushed out an update that included new YouVersion Live functionality and some Twitter features that we’re pretty excited about. The last update was also supposed to include the ability to view The Message as an offline translation. But a couple wires got crossed somewhere in that process that prevented The Message from showing up offline and also caused different translations to disappear offline for some users.

We apologize for the bugs that kept some of you from having access to your translation of choice. This update solves all of those issues, and refines the Bible app and some of the new features launched last week. Specifically here is what this update, version 2.0, includes:

In the midst of all the YouVersion Live launch excitement, we also had the pleasure of  connecting with many of you last week during Catalyst and asking you the question, “What do you love about YouVersion?” Go to the YouVersion Facebook Page to see what people had to say and to share your answer!

You have probably noticed a number of updates coming to your Bible app over the past couple of weeks. Our developers have been hard at work adding in the new YouVersion Live functionality, squashing bugs and in the most recent update adding the ability to share scripture on Twitter. With all the updates that have come to YouVersion in the last week, we also paid extra attention to detail to make this version feel very polished.

Make sure your Blackberry device has this most recent update which is version 2.0.3. Here are some other items included in this update: 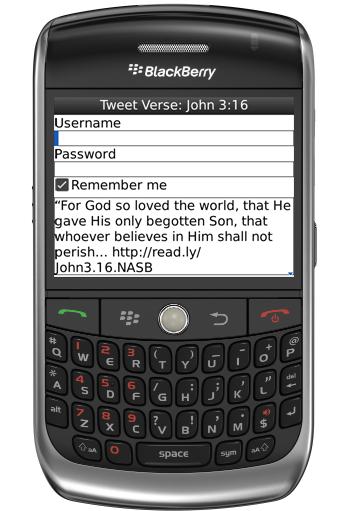 Also, be sure to check out the videos and stories we got from Catalyst in Atlanta, GA this past week, to view click here.

YouVersion Live has been growing like crazy since launching last week, with more than 1,200 groups and 1,000 events taking place this weekend. In the midst of all those events, we noticed a couple of groups that came up with especially creative ways to use YouVersion Live at their church. Check it out:

The first event is from Hope Fellowship in Frisco, Texas:

The second event is from the Seacoast Church in Mount Pleasant:

Did you see any great events this week?