Worldwide, the YouVersion community saw more people than ever before engaging with God’s Word through the Bible App. And this past year — as in every year — we continue to be amazed and humbled at all that God is doing through YouVersion. Thank you for doing your part to share the Bible with others. And let us together give honor to Him:

“To him who is able to do far more abundantly than all that we ask or think, according to the power at work within us, to him be glory in the church and in Christ Jesus throughout all generations, forever and ever.”
—Ephesians 3:20–21, English Standard Version

More Bible App installs than ever. At the end of 2011, the Bible App had been installed more than 37 million times. Then in just one year, during 2012, installs of the Bible App more than doubled, to over 75 million! December 2012 alone set a new one-month record of 4 million installs.

More of God’s Word. In 2012, the YouVersion community spent 23.6 billion minutes reading inside the Bible App. Compare that to all-time total minutes of 39 billion minutes so far, and it’s obvious that 2012 was a great year for getting into God’s Word. It was a great year for sharing verses, too: more than 31 million times, on Facebook and Twitter and through SMS and email messages.

Last but not least, here were the YouVersion community’s top 10 most bookmarked verses of 2012:

Of course, these numbers gain their real meaning when we consider what’s truly behind them: the changed lives of literally millions of people. Perhaps best of all, because of the following promise that we have from God’s Word, we honestly believe that this is just the beginning:

“The rain and snow come down from the heavens and stay on the ground to water the earth. They cause the grain to grow, producing seed for the farmer and bread for the hungry. It is the same with my word. I send it out, and it always produces fruit. It will accomplish all I want it to, and it will prosper everywhere I send it.”
—Isaiah 55:10–11, New Living Translation 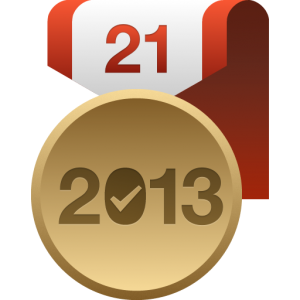 If you’ve never read your Bible consistently before, it can be hard to get started. Research indicates it takes 21 to 28 days to establish a new habit. That’s why YouVersion started the 21-Day Challenge.

The 21-Day Challenge is designed to inspire you to try — and stick to — using Reading Plans to help you connect with God’s Word. All you have to do is complete the daily reading selection for any Reading Plan for 21 days, from Monday, January 21 through Sunday, February 10. You’ll get a special 21-Day Challenge badge on your YouVersion profile, and you’ll be entered in a drawing to win one of five iPad minis or one of 21 YouVersion prize packs! (See official rules below.)

Reading Plans are a proven tool to help you read more of the Bible, more often. And once you’ve read the Bible for 21 days in a row, you’ll have all the momentum you need to keep going. With over 360 Reading Plans and counting, you’re sure to find the plan that’s just right for you. Thanks to YouVersion’s incredible worldwide community of translation volunteers, you can even choose from plans in any of 29 languages.

Tell your friends… and keep reading!

For a limited time, you can now download the New International Version (NIV) for offline use in the Bible App.

What does offline mean?  When you download a version, you can read it literally anytime, anyplace, even when you can’t connect to your service provider or to the Internet. On a plane, in church, or even when you just can’t get a good signal – offline versions help you stay connected and reading the Bible wherever you go.

If you missed your chance last time, have a new mobile device, or if you know someone who would be excited about this offer, spread the word and make sure you take advantage of this opportunity. Special thanks go to Biblica and Zondervan for making the NIV available to the YouVersion community!

Note: When you look at the available versions on your device, remember to hit the “Refresh” button, to ensure that the list you’re seeing is the most current.

Many versions in the Bible App™ are available to download to your mobile device, generously provided by Bible publishers free to the YouVersion community. (And several of these are available all the time—not just during promotions.)

Below are links to detailed instructions on how you can download the NIV, or any version that is available for offline download. Be sure you don’t miss this opportunity!