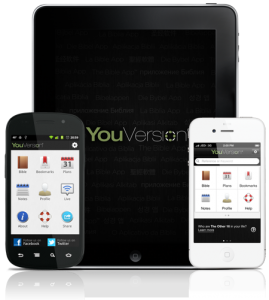 What’s a great way to celebrate the birth of our Savior? According to the worldwide YouVersion community, the answer for Christmas Day 2011 was, “Share the Bible!” Together we gave away more free Bibles and helped more people connect to God’s Word through free YouVersion accounts than on any other single day in YouVersion’s history.

The November webcast was the first time we mentioned The Other 16 — that 16 out of 17 iOS and Android devices hadn’t installed the Bible App. Then together we shared the Bible on Christmas Day, telling others our favorite things about God’s Word, even helping friends and family install the Bible App™ on their devices. And the results are in:

Many apps for mobile devices won’t see 300,000 installs total — let alone on a single day. But because of you, more and more people are discovering God’s Word, joining with us in a revolution of Bible engagement. Thank you for your part in making Global Share the Bible Day such a record-breaking success!