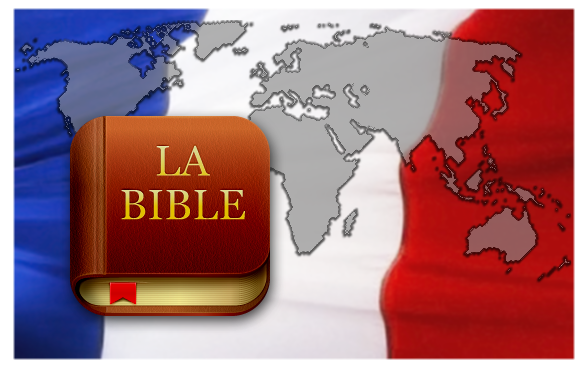 For the first time ever, every part of YouVersion is now available completely in French: the interfaces at YouVersion.com and in the Bible App™, technical support, communication, Bibles, and so much more. Of course, French has been available at YouVersion.com for some time now, but that’s just one small part of what YouVersion has to offer.

French is YouVersion’s eleventh complete language launch. English was first, then Norwegian, Spanish, Simplified Chinese, Traditional Chinese, Russian, Korean, Brazilian Portuguese, German, and most recently, Dutch. Today, we’re officially announcing many of the ways that you can engage with the YouVersion community—entirely in French:

French Menus, Buttons and Controls. Our incredible YouVersion volunteers have been working behind the scenes for months to translate the entire YouVersion user interface into French for your iOS (iPhone, iPad, iPod touch), Android, or BlackBerry device. All you need to do is set your device’s default language to French. Or, if you have the latest Bible App for iOS update, you can change the interface language in your Bible App Settings.

Communication in French. Français is one of several languages you can select at the top right of the English version of our blog—or just go directly to the French version. Either way, you’ll find blog posts specifically for you, written in French. To ensure that you receive updates and other YouVersion communication in French, you’ll need a free YouVersion account, then visit Settings at YouVersion.com and select Français as your preferred language.

French Technical Support. If you have any questions about YouVersion.com or the Bible App, try checking the French version of our Technical Support site. If you don’t find what you’re looking for there, contact us in French, and French-speaking YouVersion support volunteers will be happy to respond to you.

French Speakers in France. According to The World Factbook, 62.8 million people live in France, making it the 21st most populous nation in the world. While France’s entire population speaks French, according to Wikipedia, French is actually the first language for many more people, as well—somewhere between 70 million and 110 million—with another 190 million beyond that claiming French as a second language.

French Speakers Around the Globe. Outside France, French is the native language of Monaco, Switzerland’s Romandy region, Wallonia and Brussels in Belgium, and Quebec and Acadia in Canada, as well as various other communities around the world. French is the second most common language in Canada, federally recognized as an “official” national language. And variations and different dialects of French are spoken in countries literally all over the planet.

Welcome to the YouVersion Family! We’re excited to welcome our newest friends, French speakers and readers, no matter where you live. In a few days, we’ll share more details on our blog about more that we have to offer you. In the meantime, we’d love for you to get started connecting with the YouVersion community on Facebook and Twitter. We’re so glad that you’re here!